Airsoft guns are appealing for a variety of reasons. For beginners, they’re easy to use, and for those not looking to spend too much, they are affordable. They also resemble real firearms, which is ideal for those who like the look of a rifle or pistol.

Airsoft guns are used for firing round projectiles that are normally 6mm in diameter but other sizes are available. However, the exact working mechanism of a particular airsoft gun depends on what firing system you choose. 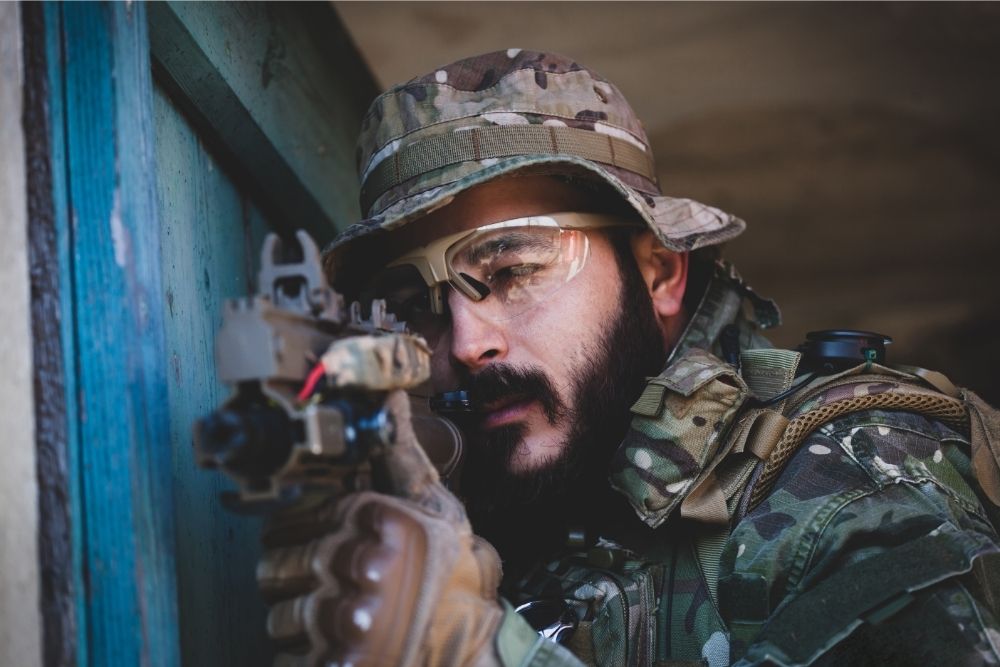 Well, electric airsoft guns are great for beginners looking to advance their skills with airsoft guns and are more affordable, especially because the rechargeable batteries are cheaper than buying gas.

They are easy to use as well as maintain, and perform well in all types of weather. They can also be used for semiautomatic as well as fully automatic and single firing, can reach up to 500 FPS, and manual cocking is not required for the spring system.

But how exactly do they work? If you currently own an electric airsoft gun and want to give repairing it yourself a try, or if you’re looking to purchase an AEG for the first time and want to know more about how they operate you will find the answers to your questions below.

Electrical Energy: This energy is supplied by the combination of electrical current and electric potential that gets delivered through an electrical circuit. This is delivered either via a LiPo or Nimh battery into the motor.

Mechanical Energy: This is the energy associated with the motion and position of an object. This energy is what makes the motor move parts inside the gearbox, such as gears and the piston.

Pneumatic Energy: This energy is related to the power of pressurized air when the piston is launched through the cylinder and forces air out of the nozzle to fire the BB.

All contemporary electric airsoft guns use a mechanical system inside their gearbox that contains three gears and a motor. This allows electrical energy to be transferred into mechanical energy smoothly.

It all starts with a simple trigger pull which then results in trigger contacts closing and completing the electric circuit from the battery to the motor. This gives the motor enough power to begin spinning and engage the first gear, called a bevel.

The third (sector) gear then meets the piston and pulls it back so the spring is compressed. At the same time, a small nub on the sector gear pulls the tappet plate back which then also retracts the air nozzle towards the cylinder.

This is so the next BB can feed upwards into the hop-up. The tapper plate then returns to its original position and chambers the BB.

As soon as the piston is released by the sector gear, the spring will shoot back and launch the piston through the cylinder, forcing pressured air out of the nozzle and firing the BB. This is when the mechanical energy is transferred into pneumatic energy.

How do other airsoft guns work?

As the name suggests, spring airsoft guns utilize the power of a spring to propel BBs down the barrel of a gun. These guns work on mechanical power.

Spring-powered guns can be pretty divisive. Some would consider them the best on the market, or the worst. This is all down to the power of the spring.

Again as the name suggests, gas-powered airsoft guns harness the power of gas to propel the BB down the barrel. They often shoot harder and faster than spring-powered guns.

The most common type of gas airsoft gun is a pistol. They also tend to be semi-automatic though some models are fully automatic.

Propane or ‘green gas’ is the gas used most often for gas airsoft guns. Some gas-powered guns use CO2, and this can be used for both rifles and pistols.

CO2 guns actually tend to shoot at a higher FPS than green gas guns. Other gas types that can be used are HFC134a refrigerant and nitrogen but these are less common.

If you’re a beginner, hopefully you have learned a bit more about the electric firing system. But you may be wondering which is better for this kind of system, a pistol or a rifle?

There are actually more electric airsoft rifles than pistols, but there are four important things to consider when making a decision on what gun is right for you. Size, power, capacity, and price.

Rifles tend to be more precise and powerful and can hold more rounds at a time. But they are heavy and cumbersome, especially compared to a pistol. A pistol is definitely easier to maneuver. Rifles also tend to be more expensive but do shoot at a higher rate of fire.

Pistols are small, and easy to move around with, but they hold fewer rounds than a rifle. However, a high-capacity magazine allows longer-lasting use. Still, rifles have better reach than a pistol and hold much more ammunition.