Airsoft has been around for around 50 years now, and in that time the industry has seen numerous brands and innovations make their mark on the hobby.

Some brands have been there from the start while others have entered into space more recently, but the vast selection available offers an abundance of products at a variety of price points for both new and experienced enthusiasts. 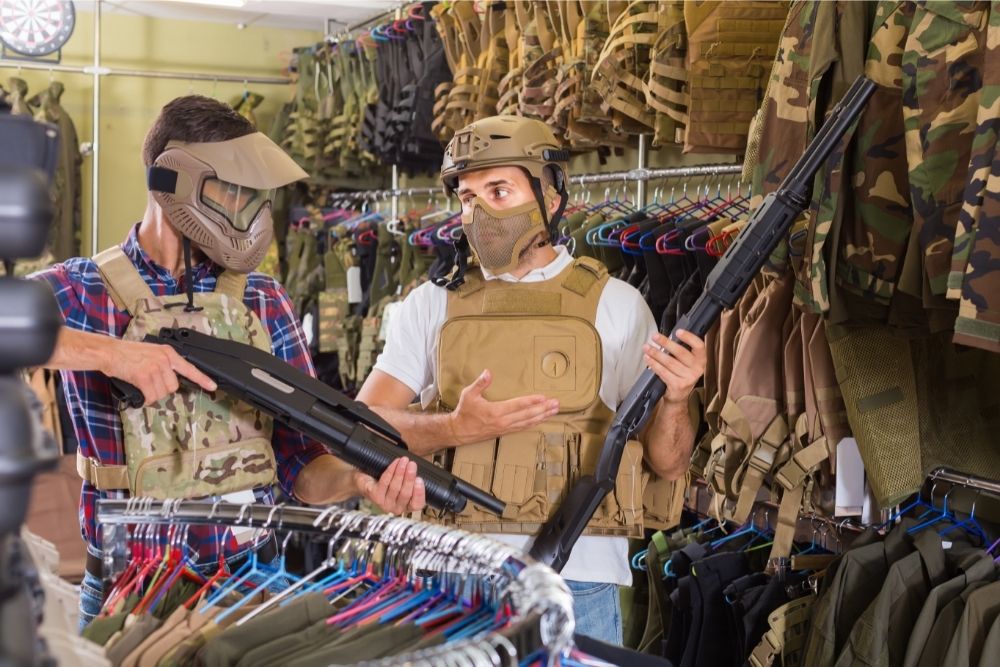 Airsoft was first invented in Japan in the early 1970s, and by the late 80s, it had reached the UK and would soon spread to the US too.

One of the most famous airsoft manufacturers from the earliest days of airsoft is Tokyo Marui.

Being one of the oldest and most innovative airsoft manufacturers, their ideas and systems have had an enormous impact on the hobby as a whole.

After all, the very first AEG (Automatic Electric Gun) was made by Tokyo Marui, and AEGs are now the most popular airsoft format, particularly for beginners.

Tokyo Marui also invented the hop-up system, which is what helps BBs to travel further with more stability. Almost every airsoft gun today now uses hop-ups to increase performance and these are seen as a core component of even the simplest airsoft guns.

Tokyo Marui’s DNA can be traced in almost every current airsoft gun because of this, indicating their status as a key founder and innovator in airsoft design and development.

This also means that a lot of existing airsoft guns are made to be compatible with Tokyo Marui components, and any designs that aren’t compatible are considered to be less desirable as it can be harder to source replacement or custom parts.

While there are some disadvantages due to their guns being made in Japan, such as a lower starting FPS rating, there’s no denying that Tokyo Marui makes some of the best airsoft guns available anywhere in the world.

This is of course reflected in their price, but most airsofters consider this a worthwhile investment due to their reliability and quality.

There are other long-standing competitors, such as Classic Army and ICS who make up the so-called ‘big 3’ of airsoft alongside Tokyo Marui.

These are the three oldest brands and have some of the best products on the market, however, newer competitors spring up very often making the airsoft market one of the healthiest of any hobby.

Is G&G a good airsoft brand?

G&G, or Guay and Guay as they are also known, are very well regarded in the airsoft world and have a great range of equipment.

Their rifles in particular are known for their reliability and excellent out-of-the-box performance, making them a favorite of beginners and airsoft sites who need a supply of quality rentals for new players to use.

The most famous G&G rifle is the Combat Machine, and it’s been one of the best selling airsoft guns of the last decade, with very few airsofters, never having experienced the excellent performance of these rifles at some point.

The original Combat Machine is a little dated now, but G&G continues to innovate and provide amazing value to airsofters, with their new updated Combat Machine receiving a visual facelift and several internal upgrades that make this rifle one of the best available at any performance level.

While the Combat Machine line is an amazing starting point for any airsofter, they also offer several higher-spec guns to those who want a more premium feel such as full metal constructions or recoil blowback features.

Their time in the market and their close relationship with Tokyo Marui make G&G one of the biggest airsoft brands, with some of the best-reviewed and best-regarded products.

The only drawback is that they are focused mainly on weapons and their wider catalog of equipment, such as accessories and apparel is a little limited.

Thankfully most G&G guns are very compatible with other accessories so you will still be able to customize your rifle, should you wish to do so.

Is Umarex a good airsoft brand?

Umarex is a German airsoft brand that makes some of the best replica weapons in the world.

Established in 1972 just after the beginning of airsoft’s fledgling years, Umarex is now one of the largest producers of replica firearms, with wide product lines, superb performance, and outstanding aesthetics.

Mainly specializing in producing extremely accurate replicas of existing firearms, Umarex is known to produce some of the best-looking and most ergonomic airsoft equipment available.

Some of their most popular products are actually officially licensed by Heckler and Koch, one of the world’s oldest and most famous gunsmiths.

Some of HK’s designs are so famous that they are actually a part of pop culture, used widely in video games and movies. Iconic weapons such as the MP5, Glock 17, HK416, and many many others are all reproduced by Umarex in astounding detail.

If you’re lucky enough to own an Umarex gas blowback rifle, you will find yourself using one of the most immersive and realistic airsoft packages in the world which explains why these weapons are so popular with discerning enthusiasts.

Despite this focus on accurate reproduction of existing guns, Umarex does also produce other high-quality accessories such as tactical lights, laser modules, gas canisters, and other equipment to help you ensure you have all you need to dominate the playing field and look good while doing it.

Is BBtac a good airsoft brand?

BBtac are not as famous or as well known as some of the other leading airsoft brands, however, they fill an important niche within the airsoft ecosystem, helping beginners to learn how exciting airsoft can be without needing to invest in expensive equipment before they get started.

BBtac offers a wide range of simple and effective airsoft rifles, pistols, and even BBs to help casual players get involved in the fun.

While BBtac doesn’t have the storied heritage of quality and innovation of the likes of Tokyo Marui, this is a great starter brand that makes weapons with respectable performance and upgradability.