Just like any other product on the market, you can buy cheap and cheerful airsoft guns that don’t last. You can also buy incredibly expensive guns that are just as bad. It's important to remember that price isn't always an indication of quality. 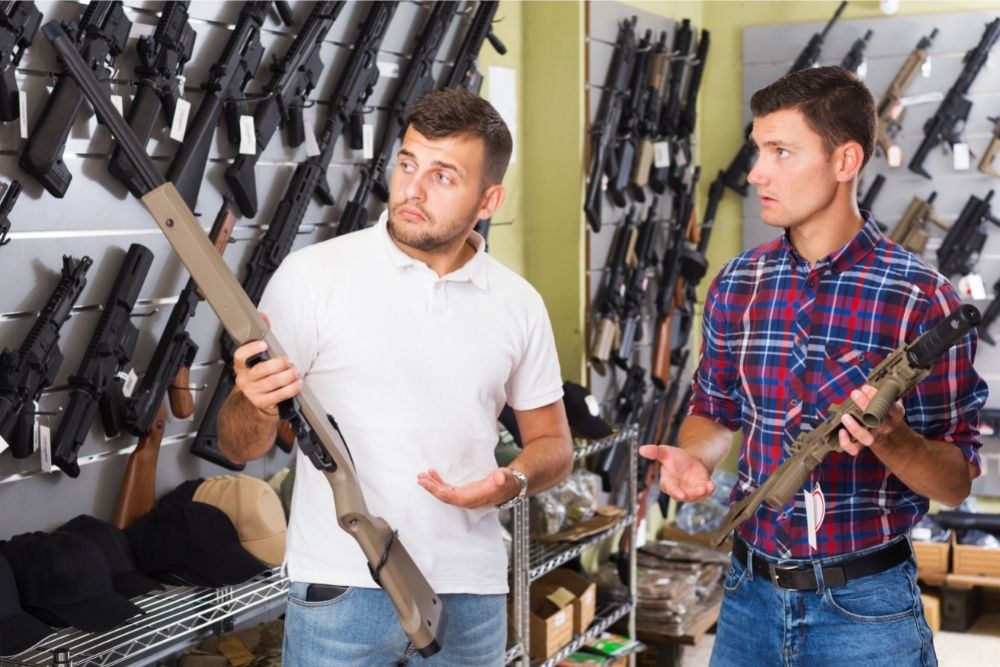 That being said, most airsoft guns you can expect to pay at least $200. The exception to this rule is if you're buying pistols. These can be a lot cheaper than rifles and automatic weapons.

The more expensive airsoft guns are typically more powerful, more accurate, more durable and more realistic. If you want to buy a cheap airsoft gun, you will have to sacrifice at least one of these things.

Spring powered airsoft guns tend to be cheaper. They are the simplest operating mechanism and essentially use the coiled power of a string spring to push air down the barrel and expel the BB.

To reload, the user must physically recompress the spring either with a pump if it's a shotgun or the bolt handle if it's a rifle.

Despite being the cheapest option, spring loaded guns are generally more powerful than their electric counterparts. This is because stiffer springs can be easily used without worrying about overloading motors and gearboxes.

The issue with spring powered airsoft guns is the fact that they don't usually last as long as other types. This is because the spring loses its tension overtime. Luckily, many spring powered guns can be modified and upgraded to last longer.

The other major issue with spring powered airsoft guns is the low rate of fire. As you have to manually recompress the spring after every shot the really slow down your rate of fire.

Gas powered airsoft guns aren't seen as much as spring or electric guns. They generally cost about the same amount as mid to high-end electric guns. However, they have the added cost of replacing the compressed air canisters. This makes them more expensive to run overtime.

Electrical airsoft guns are probably the most popular most common airsoft gun scene today. They range in price from $150 to over $1000.

Electrical airsoft guns still use springs to propel air down the barrel however they use an electric motor to recompress the spring after every shot. Electrical motors significantly increase the rate of fire meaning that electrical guns can be automatic where spring powered guns are not.

The advantage of having a high-capacity magazine is that you don't need to stop and refill your BBS as often.

If you're new to airsoft you might want to consider getting a clone brand airsoft gun. Clone brands essentially reproduce the design and mechanics of more expensive guns. However, they use lower-grade materials.

Clone brands typically cost less because of the lower grade materials. However, they are also less reliable and less durable.

Often the realism of a gun will have a huge impact on the cost. If you're looking to get a cheaper airsoft gun, then look at the less realistic looking weapons. Airsoft guns that are designed and painted to look like their real-life counterparts can cost hundreds of dollars more.

What is the Most Expensive Airsoft Gun?

As an example, you could spend over $500 on the EMG Salient Arms International APS CAM870 Deluxe Airsoft Gas Shotgun. This is an incredibly powerful gun that uses burst action to fire a spray of BBs.

Similarly, you could spend over $1000 to buy a Browning airsoft machine gun. This gun is a replica of the World War Two tripod mounted machine guns.

To buy the gun alone costs over $900 if you want to add the tripod and the mount package, you're looking at well over $1000. That's not including the thousands of babies you're going to need because this gun has a fire rate of 9 to 10 rounds a second.

The gun that is often touted as the most expensive airsoft gun is the Evike Custom ‘Optic Thunder’ M4 Airsoft AEG Rifle. It hit the market in 2016 costing an incredible $10,000 but has since been discontinued.

This gun was more of a marked employee and educational tool used by Evike. The idea was to show airsoft players that you don't need to put everything on you again to play airsoft.

Instead, they urged customers to think tactically and select the best accessories and equipment for their style and their game.

Custom guns typically are more expensive than standard manufactured guns. A lot of airsoft companies will buy standard guns, add accessories and equipment, do custom paint jobs before reselling for a higher price.