Airsoft pellets are typically made out of plastic however they are often misnamed as BBs which are metal pellets. Cheaper and lower grades airsoft pilot will just be made from plastic however there are few variants that are used by different airsoft players.

Contents show
1 Can You Put Metal BBs in an Airsoft Gun?
2 Are Metal BBs Allowed in Airsoft?

Biodegradable pellets, for instance, are quite common. They are usually required by outdoor airsoft fields where it is difficult or impossible to sweep up the pellets after a game.

Naturally, the standard plastic pellets would pollute outdoor airsoft fields as they do not degrade. In addition, the center of these plastic pallets tends to be mineral, or petroleum based. These stick around longer even than the plastic coatings. 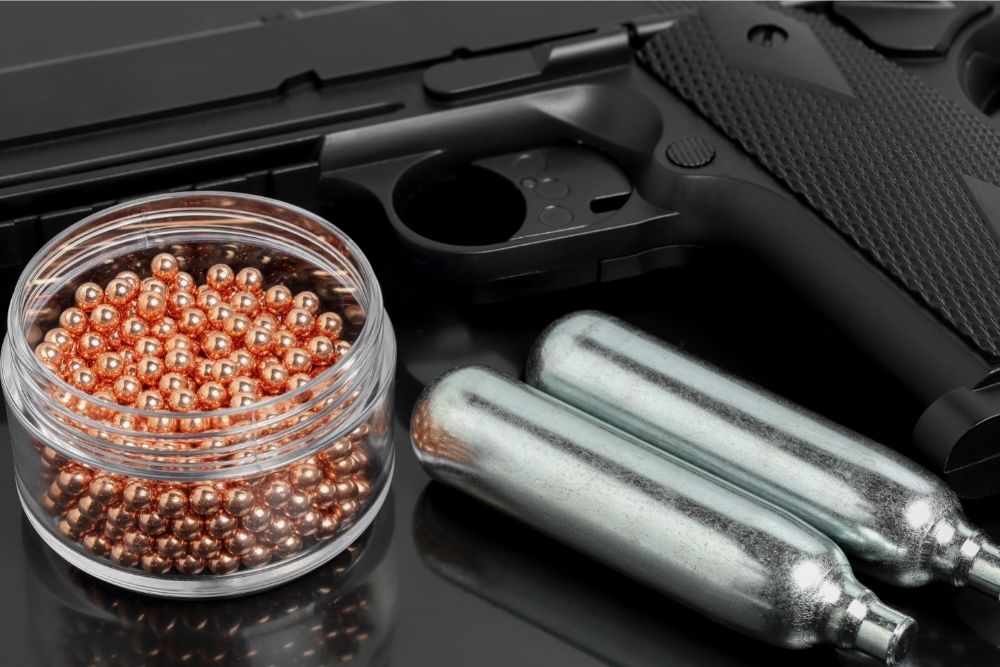 Biodegradable pallets typically used different kinds of resins. Often these resins have come from the agricultural and farming industry and are usually compostable.

The raisins that are typically used for biodegradable airsoft pellets or poly lactic acid or polylactide. These are based on renewable corn materials.

Another type of air soft palate is a tracer pellet. Tracers are glow in the dark pellets that are typically used at nighttime.

The pellets need to be used with a device that charges them. The charger flashes the pellet with light as they leave the barrel. This makes them visible and luminescent as they fly through the air.

Tracer pellets are helpful because they allow you to check whether your shot hit the mark. This is naturally difficult at night, especially if you’re using dark pellets.

You can find metal airsoft pellets, but these can only be used for target shooting. Metal pellets have the ability to injure players which is why they are banned by most fields.

Metal airsoft pellets are ideal for target shooting in windy conditions. Metal pellets are heavier which means that they are less likely to be blown off course.

Can You Put Metal BBs in an Airsoft Gun?

Strictly speaking, you can’t use metal BBs in an airsoft gun. True metal BBs as small metal balls fired from a BB gun.

The pellets used in airsoft guns are often called BBs, but they aren’t actually BBs. The word ‘BB’ and ‘BB gun’ come from the size of shot that was typically used in smooth bore shotguns.

An air rifle company made and marketed a gun that shot the BB shot which became incredibly popular. So much so, that the name entered common usage to describe guns that shot small, spherical balls.

Putting metal BBs in an airsoft gun will result in lots of space in the barrel. This means that the BB won’t get enough momentum behind it, and it will only go a few feet out of the barrel.

The BBs may also get stuck or caught in parts of the gun thanks to their small size. This can cause significant problems with the mechanism and motor of your airsoft gun.

Another issue with metal BBs is that they are denser and therefore heavier than their plastic counterparts. Even if you found a metal BB of the right size for your airsoft gun, they would be too heavy for the gun to launch very far.

The other thing about metal BBs is that they are harder than plastic or resin airsoft pellets. This means that they can cause significant damage to the magazine and barrel of your airsoft gun because they’re not designed for metal BBs.

Are Metal BBs Allowed in Airsoft?

Metal airsoft pellets are only allowed for target practice. They cannot be used on airsoft fields and in airsoft competitions. This is because they have the potential to harm other airsoft players.

Thanks to their added mass and strength, when metal BBs are fired, they can pierce eye protection, clothing, and human skin. This is obviously not acceptable when playing with other people.

For target practice, metal airsoft BBs can be quite useful, particularly if you’re shooting outdoors. The added mass prevents the BB from being blown off course by wind. This makes them more accurate over longer distances.

If you’re going to use metal airsoft BBs then you’ll also need a gun with metal barrels and nozzles. This is because the metal BB can cause significant damage to the nozzle when fired. It can dent, scrape, and punch through the softer plastic.

Even if you don’t notice an issue initially, after a few shots you’ll definitely start to see signs of damage. The more you shoot metal BBs with a plastic gun, the closer you get to a critical failure.

If we’re talking about true metal BBs, as in small metal balls fired from BB guns, then, no, these are not allowed in airsoft.

Metal BBs are about 2 mm too small for airsoft guns. This makes them difficult to fire out of your weapon. The ball doesn’t sufficiently block the barrel which means that air pressure can’t build up behind it. Without enough air pressure, the bullet will not be propelled far enough.

Another issue is the fact that metal BBs are denser which means that you need extra power to actually get any distance on your shot.

There just isn’t really any reason to use metal BBs in your airsoft gun. At best, your shot will be pathetic, at worst it can cause serious damage to your gun or fellow players.