Pain, like everything else in life, is subjective. Everyone has a different pain tolerance and threshold and something that could incapacitate one person could be shrugged off with almost no ill effects by another.

But if you get shot by an airsoft gun, you’ll definitely feel it, but how much it’ll hurt is entirely dependent on a number of different factors. 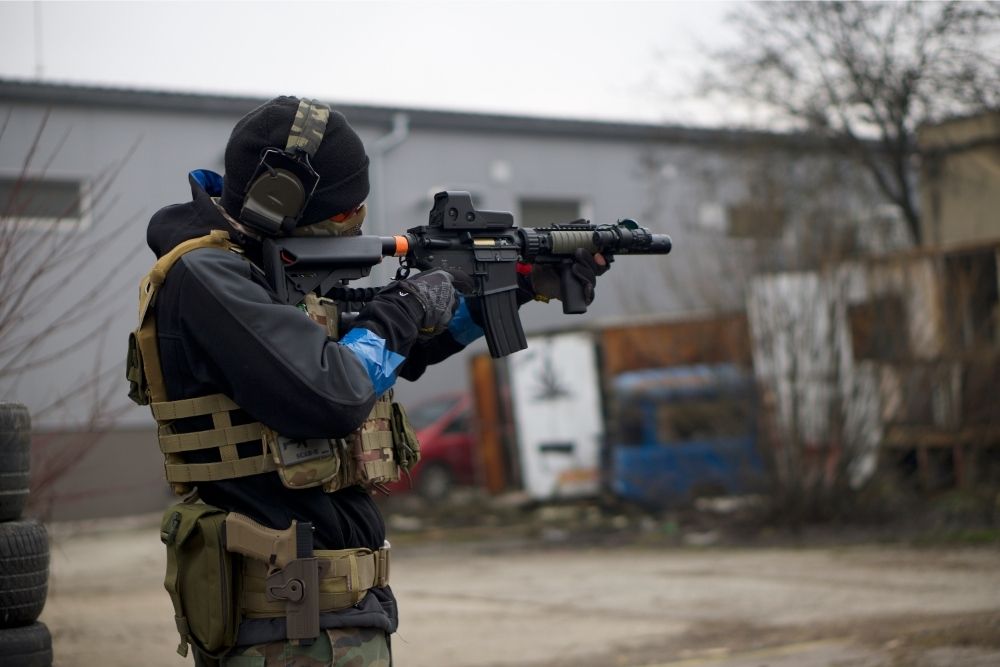 The first of the factors that determine how much it’s going to hurt when an airsoft pellet hits you, is your pain threshold.

How much the hit will hurt is also dependent on where you get shot, as some areas of your body are more sensitive than others, and might be protected by clothing, while other areas might not be covered and won’t feel the benefit of the extra layer between your skin and the pellet that hits you.

If you get shot in the chest, it’s going to hurt far less than if you’re hit in the neck or one of your fingers while you’re not wearing gloves.

And if part of your body isn’t covered when it gets hit, it’s going to hurt a lot more without the added protection that a layer of clothing can, and will provide.

How much getting shot will hurt will also depend on the range that you get shot at and the FPS (feet per second) rating of the weapon that you’re shot with.

The closer a shooter is to you, the more it’s going to hurt when they do shoot you, as the closer to you the weapon is, the more velocity the pellet will have when it strikes you. And the greater the velocity of the pellet, the more it’ll hurt when it finds its target.

We also touched on the FPS rating of a gun, and how that can affect the level of pain that you’ll feel when you’re hit, and as it’s important (at least you’ll think it is when the pellet hits you), we should probably explain it in a little more detail.

The FPS rating that’s attributed to an airsoft gun determines how powerful that weapon is - the higher the FPS, the more powerful the gun is. So if you get shot with an airsoft gun with a high FPS rating, it’ll hurt more than if you were shot by a weapon with a relatively low FPS rating.

Having said that, getting shot by an airsoft gun is by no means as painful as you might think, or may have been led to believe, that it is.

When a pellet hits you, it’s no worse than being stung by a wasp or being pinched by your partner after you forgot your anniversary and turned up at their doorstep without flowers or a card.

Yes, it’ll hurt when you get shot by an airsoft gun, but it won’t hurt a lot, and when you’re fully immersed in a game and your heart is pounding like a double kick drum and the adrenaline is pumping through your veins, there’s a very good chance that you won’t even notice that you’ve been shot.

Does Airsoft Hurt With Armor?

There’s a reason why people wear armor and padding when they venture out into the field and take on another team in an airsoft battle. It’s to minimize the pain and stop it from hurting when they do get shot by an airsoft gun.

If you’re looking for a way to stop being hurt when you do get shot, then armor is the medium that’ll take the sting out of every hit.

It might feel you’ve been stung by an angry insect if you get hit by a pellet when you’re not wearing armor, but if you are wearing armor, then you probably won’t even feel the pellet hit you.

Having said that, if you’re wearing thick clothing, like a hoodie or a sweatshirt when you’re engaged in battle and the pellets are flying all around you, if you get hit by a stray round, then you probably won’t feel it.

Why? Because your clothing should provide more than enough protection to take the pain out of any direct, or indirect hit.

Armor is great, and it makes you look good while you’re in the thick of a game, but truthfully a good sweatshirt or a thick hoodie will give you just as much protection as armor will.

And a sweater won’t be as restrictive and won’t cost you or your pocketbook as much as armor would either.

Because of the type of rounds that each gun fires, there’s only one answer to this question and we’re pretty sure that you already know what that answer is.

BB (Ball Bearing) guns fire small, steel ball bearings, and that old wives tale that you might have heard when you were growing up about them packing enough punch to kill a person? There’s an element of truth to it, as a mistimed BB shot could drop someone in their tracks.

Airsoft guns, on the other hand, fire small plastic pellets and with all the best will in the world, they’re not exactly known for their stopping power and haven’t, as far as we know, become the subject of urban legends about what can and can’t kill you.

What Hurts More - Paintball or Airsoft?

But it only hurts more because the size of the round that a paintball gun fires is much bigger than airsoft pellets are.

Airsoft guns have a higher FPS rating than paintball guns do, but because the rounds they fire are much smaller than those fired by paintball guns, they don’t hurt as much when they hit you.