Trying to navigate the choppy and turbulent waters of airsoft combat and find your ideal weapon when you’re a newcomer to the sport isn’t exactly easy.

It’s a steep learning curve that you’ll be expected to fully acquaint yourself with in less time than it takes one of your opponents to sneak up behind you and double-tap you in the back. 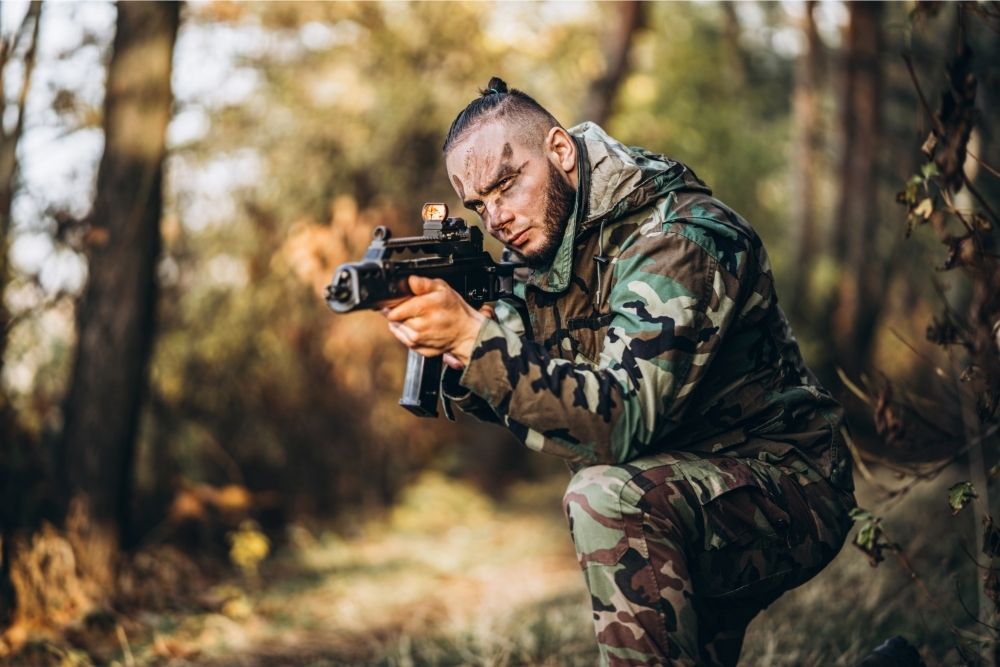 In the sink or swim airsoft scene, it’s better to be an apex predator than prey, and if you want to learn to play by the same rules that the veterans do, you’ll need to arm yourself with as much airsoft knowledge and know-how as you possibly can.

One of the primary airsoft requisites you’ll need to understand before you arm yourself with your perfect weapon is the FPS (feet per second) rating or measurement that every airsoft gun uses.

A gun’s FPS factor tells you how powerful it is, and the higher the rating is, the more powerful the gun is.

For instance, if an airsoft gun has an FPS figure of three hundred, it means that when you press the trigger, it’ll fire a plastic pellet (or BB as some airsoft fans like to call them) toward your intended target at three hundred feet per second.

That might not sound like a lot, but when you convert that number into real-world figures, it means that a three hundred FPS capable airsoft gun actually fires a pellet at one hundred miles per hour.

Now that you know a little about what FPS is and how it affects and impacts the performance of an airsoft gun, the next thing that you’ll need to know is what a good FPS for an airsoft weapon is.

Most airsoft guns have been designed and manufactured to fire a pellet between two hundred and four hundred FPS, which is a huge differential, so knowing which end of the FPS scale to choose is incredibly important.

For the record, if you’re looking you arm yourself with an airsoft gun in order to compete and play competitively, forget about the lower end of the scale.

Two hundred feet per second won’t give you the same tactical advantage as the people that you’re playing with and against, and a lot of the guns that fire at that velocity are priced cheaply, won’t last and are made by brands who aren’t saddled with the best reputations and aren’t known for the reliability and longevity of their product.

The upper end of the scale, four hundred feet per second, is slightly beyond the limit (which is set at three hundred and sixty-six feet per second) for almost every indoor game but is permitted.

And four hundred feet per second is also the point at which a pellet or BB when fired at close range, might break the skin of the person you’re targeting if they’re not wearing the armor of heavy clothing.

Lower than four hundred, the skin won’t break, but any weapon that’s rated over that magic number fired at close range will push a BB through its target’s skin as easily as a knife cuts through butter.

Knowing that the optimal FPS for any airsoft weapon is somewhere between three and four hundred feet per second,  the fact most veterans seem to prefer using weapons with an FPS rating of three hundred and fifty makes absolute sense.

It’s fast enough to hit whoever you’re aiming at before they realize that you’re about to pull the trigger and powerful enough to let them know that they’ve been hit without unduly hurting them.

What Is A Good FPS For An Airsoft Pistol?

That entirely depends on what you want, and are going, to use your pistol for.

If it’s primarily going to be used for competition and in the field, then the recommended FPS for any airsoft pistol is between two hundred and fifty and three hundred and fifty, with most long time competitors electing to use a weapon that’s rated at the top end of that FPS scale.

That doesn’t mean that there aren’t pistols that are capable of firing at a higher FPS, there are and some are rated at over four hundred FPS.

The problem with those pistols though is anything capable of firing at over four hundred FPS is dangerous at close range, which is why their use is prohibited in indoor competition. If you do want to use a four hundred plus FPS pistol, you’ll be restricted to target shooting only.

What Is A Good FPS For Airsoft Sniper?

Just like military snipers, airsoft snipers (when they’re in competition) shoot at their targets from a much greater distance than the competitors in the field do.

That means that the weapons that they use, again just like those used by their military counterparts, need to be more powerful as they need to have a much greater range than pistols do.

That’s why the best airsoft sniper rifles are rated between four hundred and fifty and five hundred FPS, so they can cover the distance the sniper needs them to at a speed they want them to.

And at the sort of distance that almost every airsoft sniper shoots from, by the time the pellet they’re firing finds its mark, it won’t hurt any more than it would if they were being shot by a three hundred FPS rated pistol.

The distance takes a lot of the sting, and the velocity, out of the pellet.

What Is The Average FPS In Airsoft?

But when the action moves outside, it’s an entirely different story. As sniper rifles and semi-automatic airsoft weapons are commonly used in outdoor competition the average FPS rises dramatically, and is usually somewhere between four and five hundred, depending on the type of weapons being used.