If you are broad-minded enough, realistically anything can kill. When it comes to airsoft guns, you may wonder if an airsoft gun has the ability to kill. If you are considering whether or not a pellet from an airsoft gun can kill upon impact, generally no.

However, it does have the potential to take an eye out, or puncture an eardrum, and this is why you are advised to wear a helmet or protective head and eye gear when you play.

Airsoft guns do not have the same firepower as a real gun does, however they are still an effective defensive weapon.

They fire plastic BB’s that do not have the velocity required to kill, however, this does not mean that they cannot still do damage. They can do plenty of damage if they hit a sensitive part of the body. 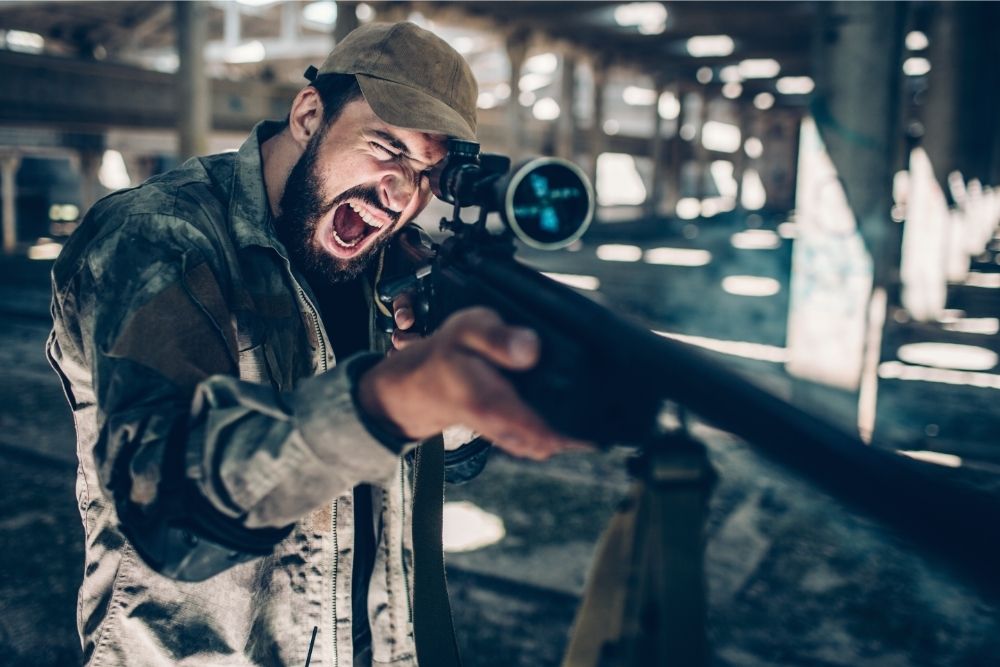 Can airsoft guns kill a human?

Airsoft guns do not have the firepower required to kill. However, if you were intending on using your airsoft gun as a home protective measure, you can still do plenty of damage with this. The BB pellets fired by an airsoft gun can damage an eye, leave a bruise, or puncture an eardrum.

Without protective gear they will hurt a lot too, so an airsoft gun can, in some cases, be a decent protective measure if you are fearful of people breaking and entering.

This being said, due to many airsoft guns being so similar to real guns, you can get add-ons. You can get accessories which will enhance the firepower of this simulation weapon, in this case it is still unlikely to kill, but it can certainly do a significant amount of damage.

This is why during an airsoft game you must wear protective gear. Especially for your eyes, face, and head.

Airsoft guns can be considered an effective defense weapon in emergency situations, but they are very unlikely to kill someone. In terms of likelihood of fatality, you are more likely to be killed by a cow.

Can an airsoft gun kill a mouse?

In theory, if you have an annoying mouse intruder in your house, and you are struggling to catch it you may consider shooting it with an airsoft gun.

While an airsoft gun does have power to kill a mouse, the chances of you actually achieving this are really low. Depending on the mouse you may just injure it, which would probably make you more likely to capture it.

However, airsoft guns can be horribly inaccurate, and a mouse is a very small target, getting a clean shot at something so small and fast with an airsoft gun is unlikely to go well. You are likely to miss every time you shoot.

If you do score a shot however, you will likely kill the mouse. It will not penetrate the mouse, but it will do enough damage simply due to force of impact, especially if you get a headshot.

Can an airsoft gun kill a rat?

Similar to mice, you can take down a rat with an airsoft gun, however, it will not be easy. These rodents are fast and small and scoring a shot on these fast moving little creatures is certainly a challenge.

It can make for good practice though if you need to practice your accuracy and have a rat problem.

If you want to kill yourself a pesky rodent, your best chance is to fire a projectile at the rodents head or neck. The force will be enough to kill the rat if shot in this area, however, if you hit any other part of the rodent, it may die, or it may simply get injured.

The latter is more likely. To kill a rat with an airsoft gun, you really want to aim for the head or neck for a successful kill. It can make for good target practice and can help you get rid of your pest problem. Kill two birds with one stone, so to speak.

Can an airsoft gun kill a rabbit?

If you do not fancy hunting rabbits with a legal real firearm, you could try with an airsoft gun, however, before you do so you will need to check that it is legal to hunt rabbits with an air gun in your area. It is not legal everywhere, and you will have to check if it is okay for you to do legally.

Whether or not you will be able to get a kill is a debated upon topic. Much like other rodents, an airsoft gun does have the potential firepower to kill a rabbit, however it would injure the animal more likely than kill it.

It may kill the rabbit however, yet it would not be a quick and ethical death. If you seek a kill, you will need to be a good shot, so it is best to practice first. You will probably want to get a shot between the rabbits eye and ear.

If you can get this shot then you can get a more humane kill. However, it is probably best to use a real gun than air soft for this.

It is generally not advised to use airsoft guns to kill small animals such as birds because they are technically toys and rarely have the firepower to land an ethical kill. While you may land a kill if you shoot a bird, you are more likely to just injure it or scare it off.

You may be able to take down a small bird if you get a headshot, however, most birds will not be as susceptible to a shot by an airsoft gun.

It really depends on the bid, some birds are relatively sensitive and have thin skin, so it is easier to penetrate their skins and get a kill, but for some it will be near impossible.

So, you might be able to kill a bird with an airsoft gun, however it really depends on the bird and the FPS of your airsoft gun.