When you first start getting into Airsoft rifles, you often want to get shooting as quickly as possible. Most of us don't spend enough time researching the first gun that we buy, maybe even the first couple.

And so we end up with a small pile of guns that we have outgrown and don't want to keep.

These guns are taking up space in our homes or armories that we would be using for better and more exciting things. So, what can we do with these outdated rifles? Is there a way that we can get rid of them and get a little bit of a return on our original investments?

You may be tempted to turn to a site like eBay to try and move on your old rifles. However, this might not be the best plan. 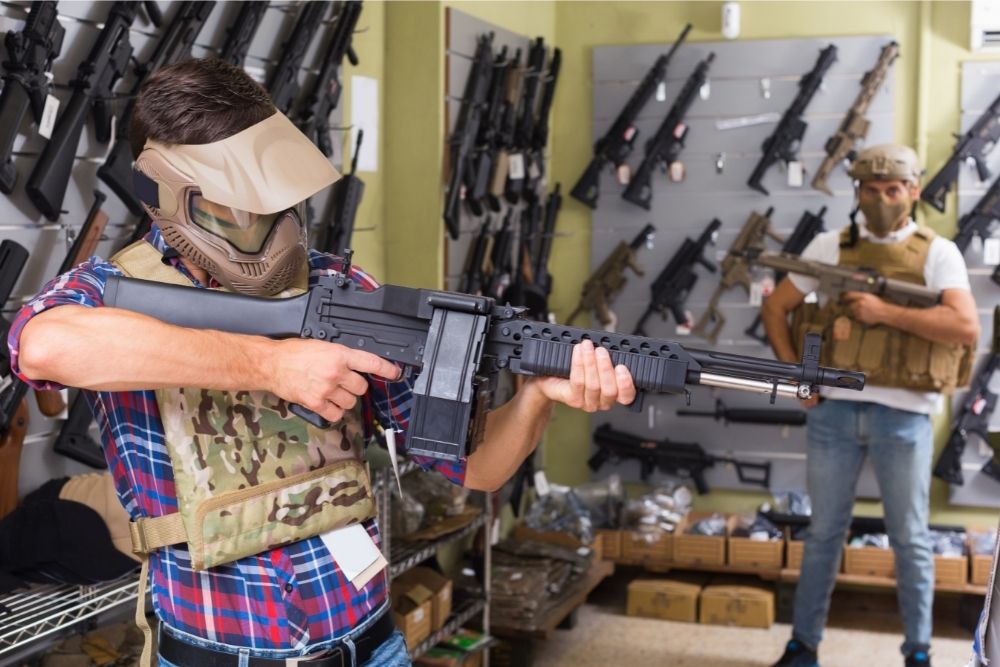 Can I sell Airsoft rifles on eBay?

There was a period of time where you were able to sell Airsoft rifles on eBay. But sadly, those times are long gone. Now, Airsoft rifles, air rifles, BB guns, and pellet guns are all banned from being sold on eBay. You cannot sell any other form of Airsoft gun on eBay.

Whether it was an error on eBay's part that was corrected or if they started enforcing this rule more harshly after a law change we do not know. What we do know is that it is no longer possible to sell Airsoft rifles on this website.

You can find eBay's full rules on Airsoft rifles and their justifications for them here.

Some people claim that it is possible to sell used Airsoft guns on eBay, as long as they are priced under $250. This is not true. No form of Airsoft gun can be sold on eBay.

There was a point in time where you were allowed to sell Airsoft rifles if they still had their orange tip attached. However, now you cannot sell any kind of Airsoft rifle, even if it has an orange tip.

While originally designed as just a safety feature, the orange tip now has a few other benefits. It allows an observer to distinguish between a real gun and an Airsoft rifle.

The orange tips have now been designed to make it easier to attach accessories to the gun - scopes and suppressors for example.

You will find many guides to taking off the orange tips online. However, manufacturers and safety experts alike recommend not removing the safety feature as it can put you in danger.

Quick guide: What is an Airsoft gun?

Airsoft guns are replicas of real guns. They are used by people taking part in the sport of Airsoft shooting. They are similar to pellet and BB guns. Instead of shooting metal bullets, they shoot plastic projectiles. These can cause physical damage, but are not as dangerous as real bullets.

They are often referred to as toy guns. This however understates the power of these guns. They are often part by part replicas of real guns and have a lot of firing power.

Manufacturers are required by law in most countries to fit their Airsoft guns with an orange cap. This is done to prevent the Airsoft gun being mistaken for a real gun. This is important for the safety of the user as well as law enforcement.

Airsoft guns are such accurate replicas of real guns and are so powerful that they are banned in many countries with strict gun laws like Australia.

While other countries require you to have a license to own, sell, or use an Airsoft gun. And the usage is only allowed in certain controlled areas - like shooting ranges.

Where can I sell Airsoft rifles?

If you are looking to get rid of your Airsoft gun and make a little cash from the process then you will not be able to do so on eBay. However, there are a few other places where you can sell Airsoft guns online.

When eBay began to tighten its regulations on selling weapons on their site HopUp was created.

This is an online, selling platform created exclusively to sell new and secondhand Airsoft guns. It facilitates both local and 3rd party sales of Airsoft guns. And even offers its users the opportunity to create their own system of selling.

Just like eBay there is a cost to selling on this platform and it can be steep. However, this cost does grant you some monetary protection as both a buyer and a seller.

That being said, their system is not foolproof, so it is important that you take precautions to protect yourself from scam artists.

This platform offers a range of 3rd party paying options, including PayPal.

The next best places to look for buyers are online forum sites like Reddit (r/AirsoftMarket, r/AmpedAirsoftMarket, and r/AirsoftSociety) and Craigslist.

The major benefit of selling through these sites is that they are barely monitored. Many of these sites still restrict the sale of Airsoft guns without orange caps, although you may get lucky. Make sure to familiarize yourself with the rules before you put anything up for sale.

As much as this is a boon, it can also be a huge disadvantage when it comes to trying to sell products. As these sites are fairly unregulated they are rife with fraud and scams.

It will be your job to protect yourself from scams on these sites. If you are new to trying to sell Airsoft guns then you may want to stick to a site like HopUp.

However, if you are looking to be able to sell your Airsoft gun without having to pay selling or posting fees then these online forums are the place for you.