Back in early 2017 the co-owner of “Lancer Tactical” Changqing Chen (also known as Chang Chen) was arrested at the SHOT show in Las Vegas. He was arrested for a “conspiracy to commit counterfeiting” among other crimes.

What were he and his co-workers accused of counterfeiting? Artsoft goggles. Although later on in a press release the company claimed that the goggles had an ANSI certification, the website where they were selling the goggles didn’t mention an ANSI rating.

ANSI stands for American National Standards Institute, and they certify an item when they believe it is safe and standardized.

The only comment on Lancer Tactical’s website about the safety of the goggles was in the goggles name, “Safety Goggles”. Otherwise, there was no mention of ANSI or other safety standards.

Since then, Lancer Tactical has been grabbing their lawyers and trying to prove that their equipment is safe and legal. But after such a fall from grace, can you trust that Lancer Tactical gear is safe?

So the question is, are Gen 2 Lancer Tactical airsoft guns safe, and are they good? 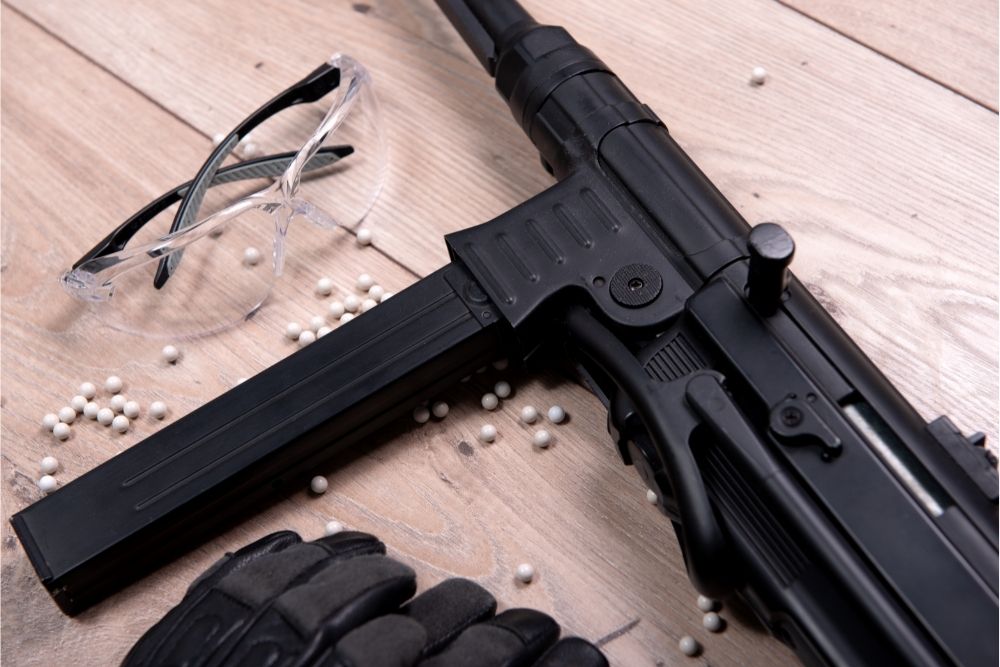 One of the first things we are going to look at is the ProLine Gen 2 MK18 because it is an upgraded gun from the previous production line. Lancer Tactical improved the internal mechanics by making the gearbox a quick change spring system.

This means that the rifle is a lot easier to reload, and you don’t need to disassemble the gearbox. They also improved the accuracy by adding a precision bore barrel and boosted the battery life. This means that they have increased the rate at which you can fire the weapon.

When it comes to the external parts of the new ProLine Gen 2 MK18,  Lancer Tactical has made the airsoft gun more durable and lightweight, by using ABS which is a simple polymer plastic.

As a result, the ProLine Gen 2 MK18 is a great entry level airsoft rifle. It isn’t complicated to reload and it is super light weight to get you used to the game!

Lancer Tactical guns and pieces of equipment have a middle to high range of prices. Knowing this you would expect them to be rated next to the other high priced airsoft guns. So, let us compare the ProLine Gen 2 MK4 to the G&G M4, a brand that is considered to be high end.

The Gen 2 has a metal frame making it durable, can fire 330 FPS (which means feet per second), and is accurate up to 65 yards.

The G&G also has a metal frame making it durable, can fire 400 FPS, and is accurate up to 33 yards.

Looking at this information you can see that the airsoft rifles are very similar in FPS and just as durable due to the metal frame, but the Gen 2 MK4 is far more accurate. It is important to say that the Lancer Tactical Gen 2 is also cheaper than the G&G.

Obviously we have only compared the one Lancer Tactical airsoft rifle to one different brand, but G&G is considered to be a high end brand! Baring that in mind, Lancer Tactical seems to have risen from their breakable history and landed with the big dogs.

Let us stick with the ProLine Gen 2 MK4 for now. Although it seems to match the G&G in qualities that you would want from an airsoft gun, the problems are ones that might worry you.

Sights are the telescopes that help you aim and see further away, they are important when you play to help you hit hidden and out of reach enemies. However, after play testing, we noticed that the sights on the ProLine Gen 2 MK4 tended to stick and you couldn’t adjust them very well.

This isn’t a safety issue, but more of a frustrating one. If you are a beginner, then this type of problem might not bother you yet, as you are trying to get to speed with your game. But when you are ready to play more accurately and tactfully, then this can really mess up your aim!

The next issue we found was with the outer barrel keymod. This is the metal tube through which the pellets are fired through. The ProLine Gen 2 MK4 is designed at a 45 degree angle which doesn’t seem to be the right fit for the attachments.

This is one reason why some of the parts seem to stick or jam. For example, the magazine or ammunition can stick, leading you to manually remove the bullets. This makes you play slower as you try to sort out your ammunition.

This doesn’t mean that the Lancer Tactical gun isn’t safe. They are just a bit clunky. There is still a lot of room for improvement on their rifles, and for their price, you might want something a bit more reliable. That being said, when they do well, they are a great gun!

We would suggest buying Lancer Tactical airsoft rifles if you are a beginner and want something that is durable and can fire fast.

When you start to know what you need in an airsoft rifle, that is when you can start looking at the more expensive but less clunky guns so that you won’t be slowed down by the Lancer Tactical clumsy changeable mechanics.