The first question you ask when purchasing an airsoft gun is if it is safe to use. Children love to play with replica guns so they can roleplay their heroes from movies such as Avengers or Ironman. But are airsoft guns safe for teenagers and children to use? Let’s explore.

Contents show
1 Which is safer? BB or Airsoft?
2 Is Airsoft safer than Paintball?

Generally, it is considered safe for teenagers and kids to play with airsoft guns but only certain low-powered models. 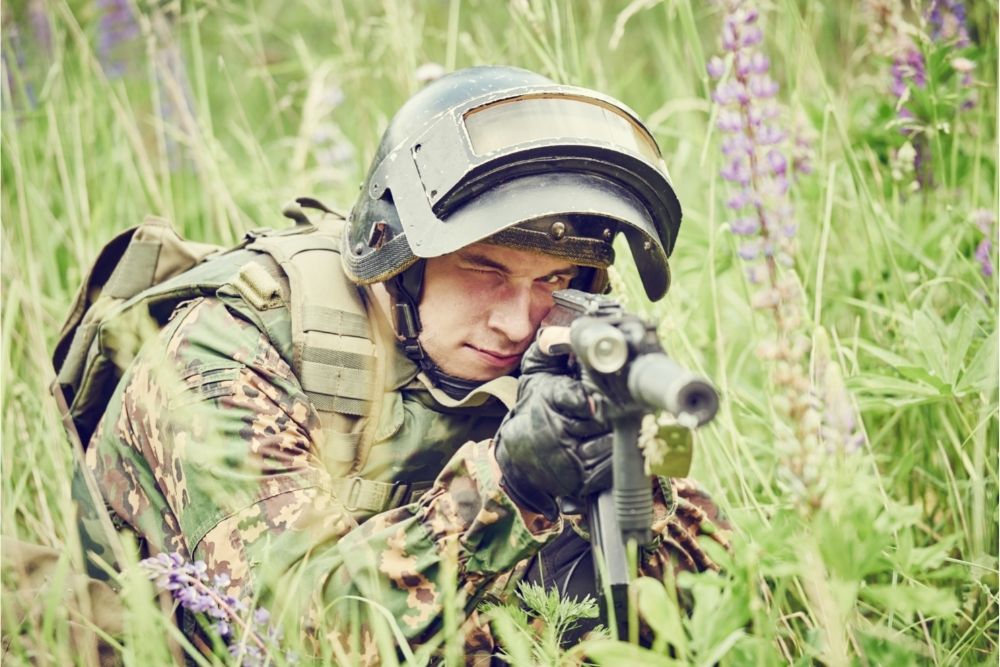 They can pretend to be action heroes around the house or have outdoor adventures. However, even though airsoft guns are safe to use, they still need to be prepared properly before use.

You should start by inserting the magazine release into the gun. If your airsoft gun is the spring type, you have to reload it every time you shoot by pulling the slide of your gun in the back and then releasing it.

Then, pull up the fire selector to unlock the safety lock. You are now ready to aim at your target and trigger. You should aim with two hands on the gun to have total control. All you need to do next is reload if you wish to continue enjoying!

Full face protection is still recommended when using airsoft guns. This is to guard against potential ricochets but if you’re shooting at targets that trap the BBs from the gun, the risk of ricochets greatly diminishes.

Normal clothing should be enough to protect your skin when using these guns as well as fabric gloves. Airsoft guns are not safe when shooting at an unprotected person.

Some high-powered models can break your skin or even chip a tooth at close range and can cause serious damage if shot at an unprotected eye.

You should consider how realistic airsoft guns look. If someone is not aware that it is an airsoft model, it could cause serious panic, and law enforcement could be called. Therefore, you should always keep the orange tip attached to make it look less realistic.

On the whole, if you are responsible and take all of the necessary precautions, airsoft guns should be completely safe to use.

Which is safer? BB or Airsoft?

There are many differences between BB and airsoft guns. The main distinction is that BB guns can cause a lot more damage than an airsoft gun. This is why BB guns are best used for hunting while airsoft models are safer when involved in competitive play.

Both airsoft and BB replicas look very similar but their effects and performances can be quite different. BB guns are regularly used for target practice and training.

Some high-powered replicas can even be used for pest control. On the other hand, airsoft guns are usually used for tactical simulation games but can be effective for target practice on occasions too.

A BB gun will typically shoot a 4.5mm or .177 caliber steel or lead BB. An airsoft gun will generally shoot 6mm plastic BBs that vary in weight. This difference in material is a big factor when considering which is safer.

High-powered steel or lead BBs can easily penetrate the skin and cause serious injury. While plastic BBs can cause some damage in high-powered, close-range circumstances, their effect is far less dangerous than a BB gun.

Both models of guns use spring, air, gas, or CO2 to propel the BBs from the cartridge. The force and speed of the BB depends on the type of propulsion but no matter which type is used, a steel or lead BB will always cause some sort of damage.

BB guns are not toys. They can cause serious injury or even death when used improperly. Nonetheless, most BB guns are designed for young people and shoot under 500FPS (feet per second).

If you wear proper protection (eyes, hands, face, etc), then both guns are unlikely to cause serious injury.

Is Airsoft safer than Paintball?

For each similarity between an airsoft gun and a paintball gun, there is also a difference. Due to the larger projectile that a paintball gun fires, this can result in a greater possibility of damage or injury.

Compared to the smaller-sized BBs used in airsoft combat, it’s hard to compare the two. However, this doesn’t mean airsoft guns are completely safe.

No matter what the projectile is, if a smaller airsoft BB hits an unguarded eye, throat, or area of skin, then it can be just as hazardous as a larger paintball hitting the same target. Both guns can cause skin welts when their ammunition hits bare skin, particularly when shot from a close range.

The biggest chance of injury when using airsoft guns is if you’re not being responsible. If you don’t take the proper precautions or wear the correct protective gear, then you will always be at a greater risk of injury.

The same goes for paintball but there is no doubt that there is a greater risk of injury when being struck with a larger paintball.

Interestingly, statistics between 2006 and 2008 show that there were a total of 2,800 reported paintball injuries compared to a colossal 64,100 in airsoft. Paintball injuries even halved during this period to just 600 in 2008.

Therefore, airsoft guns may cause more injuries as people may think they don’t need to be as safe around them.

One of the main reasons why there are fewer reports of paintball injuries maybe because of stricter safety guidelines put in place by paintball providers. Most people use paintball guns in a controlled environment which is specifically designed for paintballing.

On the other hand, airsoft guns are generally used outdoors by people having fun in their free time. This means that there are fewer safety regulations, if any, in place with most airsoft activities.

Safety is paramount in such situations whereas airsoft users tend to wear casual clothing and may not have the proper protective gear when shooting.