Meta: This article will cover how an airsoft gun actually operates. We’ll give you a brief history of this wonderful weapon, as well as a lowdown on what airsoft guns you can get, the differences between an airsoft and a BB gun, as well as the laws surrounding the use of such items.

Contents show
1 What Is an Airsoft Gun?
2 What Does An Airsoft Gun Shoot?
3 Why Do Airsoft Guns Look Like Real Guns?
4 Airsoft Gun Modifications
5 Are BBs Really Biodegradable?
6 What Is The Minimum Age Requirement For An Airsoft Rifle?
7 Our Final Say

An airsoft rifle is very similar to a BB gun in that it fires round spherical pellets at a much lower firing rate. This gun is designed to hit the target but not necessarily penetrate flesh. The purpose of an airsoft gun is for recreational use, but not to cause any harm. 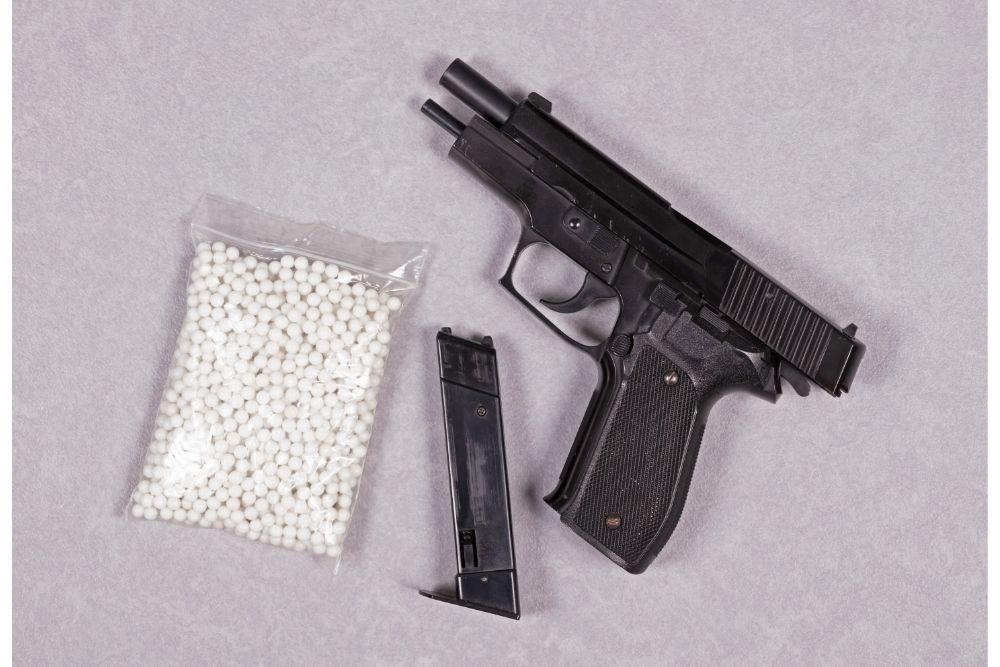 This is why most users opt for these types of guns, as they look like the real thing but are relatively harmless to use. However, there are very strict laws governing the use of these weapons. Because they look real, they could be mistaken by law enforcement as the real thing!

So what exactly is an airsoft gun? What do they shoot? What features do they have to make them safe? How expensive are they? Can you use them at close range?

Well, we’re going to answer all of your questions and more, with our comprehensive usage guide and how best to use your airsoft gun following the law. We’ll also look at the difference between airsoft and a regular gun and discuss whether BB pellets are biodegradable.

What Is an Airsoft Gun?

Airsoft guns actually predate the existence of BB guns, although you might be inclined to believe that the reverse is true. They were first invented in Japan in the 80s and were built by affixing the barrel of the gun to an air pressure hose then was used to fire out a metal pellet at high speeds.

The reason that the airsoft gun is so popular amongst kids is that they strike that perfect halfway house between a replica gun that does not fire at all and a real weapon that shoots very real and lethal bullets.

This way, a child can shoot tin cans in the same way as Bruce Willis might shoot bad guys in their favorite Die Hard film.

What Does An Airsoft Gun Shoot?

An airsoft gun shoots a light pellet that is around .12 to .45 grams in weight, coming out at a very low velocity.

You can allow your older children or teenagers to wield one of these weapons without having to worry about any serious injury. If fired at exposed skin, then these pellets might certainly bruise, but they will not break the skin.

However, an airsoft gun will still have to be played with at least one layer of clothing covering the skin to avoid these minor injuries. We would recommend that you have a long-sleeved T-shirt and trousers on to cover up any exposed areas that might damage your skin.

The one place you definitely won’t want to be shot with an airsoft gun is right in the eye. This will cause you significant danger and can still lead to blindness if done in direct contact.

An airsoft gun is designed to look like a real gun simply because children like to play with guns! This is a way of allowing your youngsters to handle the cosmetics of a gun without any of the dangers of actually operating the real thing.

However, because these guns are so real-looking, certain laws govern their usage. If you are living in Massachusetts, for example, then it will be illegal for you to buy an airsoft gun for anyone under 12.

If you are found doing this, then it will lead to significant fines and maybe even a spell in jail.

In a lot of cities, it is even illegal to practice shooting an airsoft gun in your back garden for target practice.

If you are unsure of the laws in your area, then we would definitely recommend that you read up on state legislation regarding firearms before rushing out to buy your child their first BB gun.

If you have been reading up on airsoft guns, then you might already have come across the term ‘hop-up’, which is when a strip of rubber tubing is introduced to your gun to give it a little backspin. This will give the bullet a much flatter trajectory, which results in a straighter aim overall.

There is a lot of debate around this issue, although studies have shown that at least half of the BB pellet gets ground down into dust within a few months of being discarded.

Areas where large amounts of BBs have been fired are traditionally a lot darker because the BBs have ingested a lot more moisture.

What Is The Minimum Age Requirement For An Airsoft Rifle?

We would recommend that you pick up an airsoft gun for someone who is in their teenage years, as they will have already developed the complex motor skills and hand-eye coordination necessary to make the more complicated shots.

You can give a smaller airsoft rifle or BB gun to a child, especially if you plan on developing these skills a lot quicker or harbor secret desires for them to accompany you on that all-important hunting trip.

However, you’ll need to make sure that any child with a BB gun is under strict supervision, as they could fire it at exposed skin or eyes, which could be very dangerous.

When it comes to back garden recreational activities, then we would certainly recommend that you pick up one of these rifles for you to use with your teenager. This type of gun can teach your child target practice and allow them to develop crucial hand-eye coordination.

However, you must be aware of the laws and regulations around guns, as they can be very dangerous. We would also highly recommend that you supervise younger children with BB guns to avoid them seriously injuring themselves.